THAT'S NO MOON, or, I wrote a space station generator

If you see a table with two given die rolls you can pick which one to roll. It's usually a choice either between flat and curved, or curved and size-dependent.

Later rolls call for the Size Die (SD) to be rolled. If you see SD+2 or the like, roll the station's Size Die and add the modifier.

The station has SD-2 additional functions, roll again for each.

11 A major theft has the station on lockdown.
12 Pirates recently strafed the station, are threatening to do it again unless paid off.
13 Someone hacked the station emergency services, the pressure warning sirens keep going off randomly.
14 An underboss from the regional organized crime syndicate is visiting with a retinue, everyone is on edge.
15 An unidentified body has been found.
16 The station manager is murdered shortly after the PCs arrive.
21 A solar flare fried the docking systems. Boarding the station requires spacewalks until it gets fixed.
22 A foreign bacteria got past the scanners and infected the station's algae tanks. It's not toxic, but it does make all the food taste strongly of anise.
23 A mandatory firmware update to the station doors included a prototype AI assistant. Make reaction rolls for doors.
24 Life support has gone haywire and keeps randomly pumping pure O2 into compartments. Causes giddiness at first, then diorientation, followed by lung and eye damage, and eventually death.
25 A micrometeorite swarm has damaged the solar panels. Strict power rationing and rolling blackouts is in effect until repairs can be made.
26 Starship fuel has leaked into a cargo bay after a accident. The station is waiting on a hazmat crew from the nearest popuation centre and hoping it doesn't explode before then.
31 A child's fuzzy alien pet has reproduced. A lot. Now the station is overrun by the harmless, adorable creatures.
32 A diaspora group is having an annual festival and people from all over have packed the station to attend.
33 A beloved local elder has passed, and much of the station is shut down for mourning.
34 The station is having a cooking competition to see who can prepare the local delicacy the best. Visitors are dragooned into being judges.
35 Two of the station's leaders are having a bad breakup and refusing to communicate except through intermediaries.
36 Impromptu reunion, as a childhood friend or estranged family member of a PC is on the station by (apparent) coincidence.
41 A pod of space whales is loitering near the station. Beautiful, but they're risking a collision with a passing ship.
42 An enormous teal crystalline structure has appeared in close orbit around the system's star. Everyone is having bizarre, prophetic dreams.
43 A passing band of theta radiation is making the station's hull audibly resonate. Some say it sounds like music, other hear voices.
44 The station is gripped with terror as residents report unearthly figures lurking in corridors, appearing in locked rooms, etc.
45 Silicon-based, vacuum-tolerant, metal-eating "moss" has colonized the station's hull, spreading fast. A quarantine is about to be imposed.
46 A ghost ship arrive on autopilot. Everyone is sure it's haunted (weird noises, windows smeared with blood) and no-one wants to investigate.
51 A mediocre movie starring B-list actors has come to film. They're in the way, but people are excited and they're throwing money around.
52 A famous bounty hunter has arrived and is hanging out in the cantina. Everyone is terrified, sure she's there for them.
53 A small navy ship has docked for emergency maintenance and given the crew shore leave. What do you do with a drunken spacer?
54 A popular comms-cast has claimed the station is related to a famous lost treasure. A horde of amateur treasure hunters have descended. The only question is whether the locals can hustle them for everything they've got before they all get bored and leave.
55 Another crew of freelancers arrives at the same time as the PCs, after the same score/target/job/treasure.
56 A mysterious VIP has arrived with a small army of bodyguards, personal assistants, and lawyers. Nobody knows who they are or why they've come.
61 A major strike is spreading across the system and the station is joining in, and everyone is bracing for reprisals by The Company.
62 The station is the hub for Company actions during a major system-wide strike. They're aggressively recruiting scabs and strikebreakers.
63 An election is underway to replace station management. It's hotly contested, and the locals expect visitors to take sides.
64 The Company is leveraging sanctions and blackballing against the station in a hostile takeover attempt. The locals desperately need supplies and aid.
65 System police are brutally ransacking the station and harassing the locals, ostensibly pursuing a high-value fugitive.
66 A popular anti-corporate movement is sweeping the system, and the station has become a battleground between protesters and corporate gunmen.
Posted by Malcolm Wilson at 20:46 No comments:

I like the utility of the GM Screen, but I don't like the... screen part. Plus it's not super helpful for playing online.  So I knocked together a playmat. It's mostly 5e, with a few tweaks I made, some rules brought over from Knave and The Black Hack, and some "GM moves" from BitD/AW/DW. 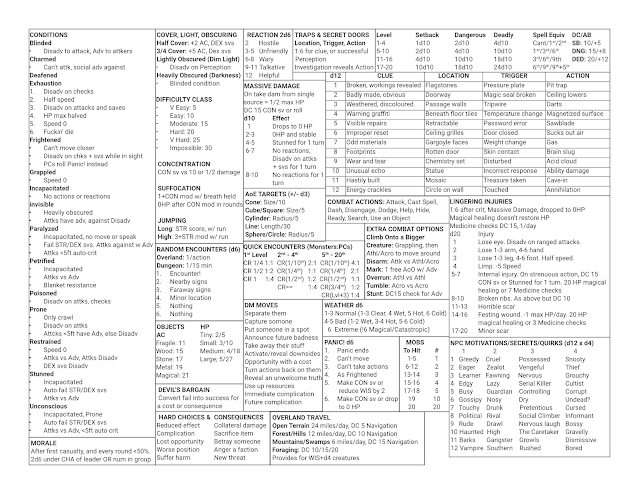 Posted by Malcolm Wilson at 19:27 No comments:

SALVATION ON A BAYONET, a Warband list for Grimlite 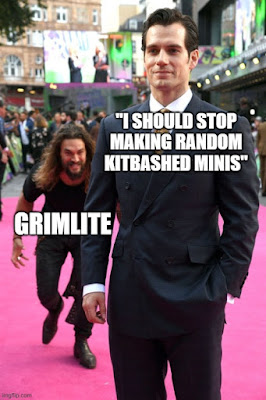 I recently pulled all my old 40k minis out of storage and have been going through them to see what's still usable and whatnot, and I sequestered a bunch of the random pirate/renegade/random Imperial Guard conversions I'd made over the years for the purposes of GRIMLITE, Chris McDowall's skirmish wargame. I like the included warbands well enough, but, well, I gotta be me and make my own.  This is the first draft, based on the minis I have available.

HOW DO YOU HUNT A BEAR, or, Excerpts From a Bestiary

At some point my decision to convert the OD&D bestiary to The Black Hack to make my life easier while stocking a hex crawl has turned into a much larger project. Because scope control is for nerds.

I just finished the "Animals" section and thought I'd share some (unedited and untested) highlights...

In seriousness, one interesting thing I found while exploring the OD&D and B/X bestiaries is that animals are appropriately scary in a way that they really aren't in later editions. In 5e a bear is not a significantly greater threat than an orc.  Which is just wrong. I would assume that the mundane got pushed down the Challenge Rating to make room for the fantastical. I decided I wanted to keep mundane animals as proper threats, while adding some fantastical-ness to them.

I am a Very Serious Designer

You should be afraid of herbivores.

But not everything needs to be an existential threat.

Posted by Malcolm Wilson at 17:05 No comments:

Malcolm Wilson
I've made games, humans, and terrible puns and I only apologize for the games. Never eaten a human. He/him.